“Migrants and refugees are not pawns on the chessboard of humanity. They are children, women and men who leave or who are forced to leave their homes for various reasons, who share a legitimate desire for knowing and having, but above all for being more.”
-Pope Francis, World Day of Migrants and Refugees (2014)

In an examination of root causes that drive people to migrate it is helpful to fully understand global migration. A root cause[i] is the fundamental reason for the occurrence of an event, in this case, migration. Often, in the migration context, there are both push and pull factors with push factors being reasons why people would want to leave their home country and pull factors being reasons why people would want to come to a new country. In migration, push and pull factors can be economic, environmental, social and political. They include some of the following: 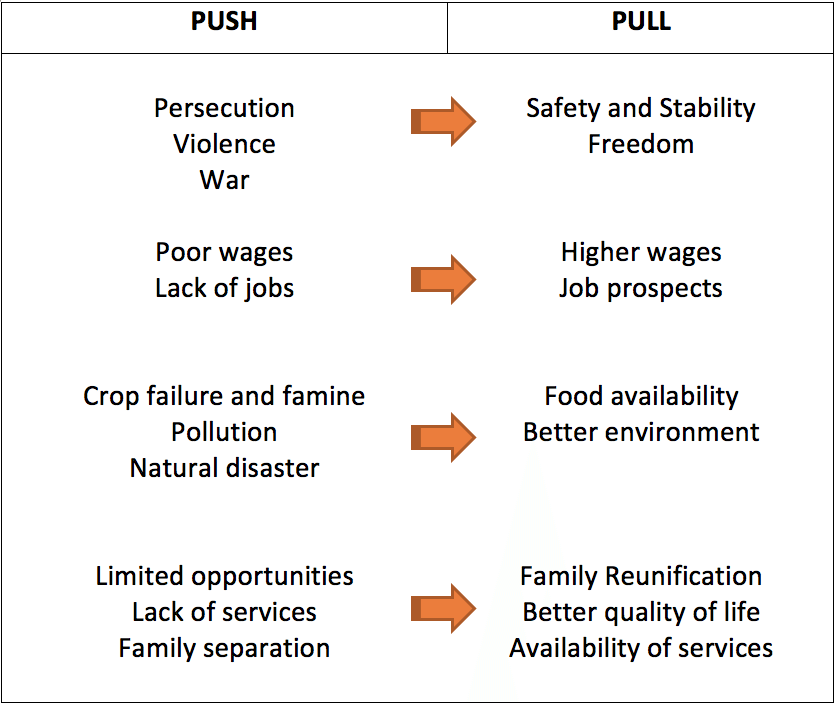 Safety factors can cause danger to individuals, prompting them to migrate. Persecution and discrimination based on nationality, race, religion, political beliefs, or membership status in a particular social group[ii] will prompt people to move large distances in search of a safer living location where they can have freedom over their lives. Danger can be imposed upon individuals by something formal, like war[iv] , or informal, such as widespread gang activity. In 2016, the Northern Triangle, composed of Guatemala, Honduras and El Salvador, was named one of the most violent regions in the world. All three Northern Triangle countries record thousands of crimes by local and international gangs and armed criminal groups, and most crimes are met with impunity. It is estimated that 10% of the Northern Triangle’s population has already left, and it is likely that many more will flee in part due to extreme violence.[v]

Economic migration, whether permanent or seasonal, is a commonly cited reason for migration. In general, it is believed that in economic migration people move from poorer developing areas into richer areas where wages are higher and more jobs are available[vi]. It is also common for people from rural areas to move to more competitive urban areas in order to find more opportunities.

Mexican migration[vii] into the United States portrays the importance of both push and pull factors in economic migration. All throughout the 20th century, seasonal Mexican laborers have crossed the border in search of work in the American agricultural industry, as the economic state of Mexico did not match the level of economic prosperity found in America. In the 21st century however, Mexican migration has slowed down significantly, and after the American recession of 2009, economic migration from Mexico to the United States began to decline. Studies show that Mexican household economies have improved due to factors like increases in access to education. As Mexico’s financial state improved and the United States temporarily struggled, both push and pull factors eroded, causing the dwindling of migration.

Migration caused by environmental factors is increasingly involuntary. Environmental factors cause displacement, or the forced movement of people by social or environmental factors.[viii] Crop failure for example, often results in both food scarcity and a drop in agricultural jobs, prompting people to move to a place with better job opportunities and climate.[ix] Pollution of water, air and soil in both urban and rural settings can also create a serious health risk to locals, forcing them to look for a better life for themselves and their children. [x]

Devastating natural disasters such as tsunamis, hurricanes and earthquakes are environmental factors that the news most often cover. In January 2010 for example, a deadly earthquake hit Haiti[xi], claiming the lives of over 90,000 people, and displacing over 1.5 million others. Despite humanitarian aid, many suffered from disease and a lack of proper shelter and basic supplies. Likewise, recent studies cite global warming as a cause for the increase in violent conflict around the world. The recent example of the Syrian drought[xii] from 2006 to 2011 was catastrophic, causing many families to lose their farms and move into big cities. The drought also increased food prices, facilitating poverty. Although global warming did not create the conflict we are witnessing today, environmental factors are important in human migration.

Social factors motivating migration grow from the human needs and desires to achieve a better quality of life. Migrants often move to ensure better opportunities for themselves or their family, like sending their child to a better, safer school or finding a job that would have not only a sufficient salary, but also important benefits and career growth prospects. In terms of education, the United States graduate programs have been a particularly strong attraction for young, talented individuals around the world.[xiii]  Individuals can also migrate in search of services, such as life-saving surgery and medical treatment that are inaccessible in their home area.[xiv]

[iii] Cándida Madrigal. “Colombians in the United States: A Study of Their Well-Being” Advances in Social Work, vol. 14.1 (2013) https://journals.iupui.edu/index.php/advancesinsocialwork/article/view/3795

[iv] “Quick Facts: What You Need To Know About The Syria Crisis,” Mercy Corps (2016) https://www.mercycorps.org/articles/iraq-jordan-lebanon-syria-turkey/quick-facts-what-you-need-know-about-syria-crisis

[x] Oliver Wainwright, “Inside Beijing’s airpocalypse – a city made ‘almost uninhabitable’ by pollution,” The Guardian (2011) https://www.theguardian.com/cities/2014/dec/16/beijing-airpocalypse-city-almost-uninhabitable-pollution-china

[xi] Sam Jones, “Why is Haiti vulnerable to natural hazards and disasters?” The Guardian (2016) https://www.theguardian.com/world/2016/oct/04/why-is-haiti-vulnerable-to-natural-hazards-and-disasters