An Overview of Asylum

For a downloadable PDF of this document, click here

1. What is asylum?
Asylum is a form of humanitarian protection available under U.S. law. A person located in the U.S. may be granted asylum if they are unable or unwilling to return to his or her country of nationality because of past persecution or a well-founded fear of persecution on account of their: 1) race, 2) religion, 3) nationality, 4) political opinion, or 5) membership in a particular social group.[i]

2. What is the difference between an asylee and refugee?
Both asylees and refugees must show they meet the same definition of being unable or unwilling to return to their country of nationality because of past persecution or a well-founded fear of persecution on account of their: 1) race, 2) religion, 3) nationality, 4) political opinions, or 5) membership in a particular social group. The main difference between an asylee and a refugee is largely the process through which an individual ultimately attains protection status. Refugees, for instance, are granted protection when they are abroad before the enter the United States. An asylee applies for protection once they have entered the United States, as an asylum seeker.[ii]

For a detailed backgrounder on the differences between a refugee and an asylee, please see the backgrounder in the “refugees” section of the JFI website.

3. Is asylum codified in U.S. law?
Yes, asylum is codified under Title 8 of the United States Code, Section 1158. The definition of asylum is based on international law which is based on the 1951 UN Convention Relating to the Status of Refugees. The U.S. signed onto the 1967 Protocol, which includes the Convention definition. Further, the definition was incorporated into U.S. law in the Refugee Act of 1980. [iii]

4. Is there a “right way” to claim asylum at the border?
No. U.S. immigration laws state that individuals have the right to seek asylum regardless of whether they enter the country at an official port of entry (POE) or anywhere else along the U.S. border, such as in between the official POEs. And, while President Trump has issued a Proclamation that proposed limiting asylum to those individuals coming to POEs, [iv] that action has been challenged in the federal courts.[v] On November 19, 2018, a federal judge in San Francisco issued a temporary restraining order[vi] regarding the narrowing of the ability to access asylum and a preliminary injunction, or temporary pause, of the Proclamation was ordered on December 19, 2018. [vii]

5. How do you apply for asylum?
Individuals can apply for asylum through either an “affirmative” or a “defensive” process. Individuals who are not in removal proceedings can petition for asylum affirmatively through United States Citizenship and Immigration Services (USCIS), a division of the Department of Homeland Security (DHS). Learn more about this process here.[viii] “Defensive” asylum is the application process for individuals who arrive in the U.S. in an unauthorized manner, voice a fear of return or persecution and are issued a Notice to Appear (NTA) in immigration court where their case will be adjudicated by an immigration judge. Learn more about this process here.[ix] Both forms of asylum are perfectly legal, discretionary, and apply the same standard.

6. Have the number of people that have been applying for asylum increased? Why?
Yes. The numbers of individuals seeking asylum, specifically from the Northern Triangle of Central America (El Salvador, Honduras, and Guatemala), has increased recently due to the pervasive violence that threatens the lives of citizens in the Northern Triangle, a lack of state protection from their respective governments, as well as from a lack of economic opportunity, food insecurity and climate change. El Salvador, Honduras, and Guatemala have consistently ranked among the top 20 most dangerous countries in the world.[x] 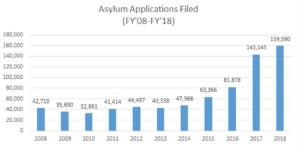 For more information on the root causes of migration, please see our backgrounder.[xii]

7. What is the approval rate for asylum applications?
In recent years, asylum denial rates have grown faster than asylum grant rates; 65% of decisions in Fiscal Year (FY) 2018 were denials, marking it the sixth year in a row of growing denial rates.[xiii] Data has shown that legal representation gives asylum-seekers a much higher probability of succeeding in their asylum claims.[xiv] Denial rates in FY 2018 made it clear that as it becomes increasingly more difficult for individuals to be granted asylum, it is imperative that they have access to adequate legal counsel.

8. What does the Church teach regarding asylum?
The Catholic Church recognizes the right of sovereign nations to control their borders, but also believes that those fleeing violence and persecution should be protected. In a recent statement, Bishop Joe S. Vásquez of Austin, Texas and Sean Callahan, President and CEO of Catholic Relief Services said, “[w]e steadfastly affirm a person’s right to seek asylum and find recent efforts to curtail and deter that right deeply troubling. We must look beyond our borders; families are escaping extreme violence and poverty at home and are fleeing for their lives.”[xv]

10. Are asylum applicants entitled to a lawyer?
No, because immigration proceedings are civil and not criminal, there is no federally mandated right to counsel.

[ii] Asylum in the United States, American Immigration Council (May 14, 2018), available at https://www.americanimmigrationcouncil.org/sites/default/files/research/asylum_in_the_united_states.pdf.

[xxi] U.S. Conference of Catholic Bishops/Migration and Refugee Services, et. al, The Real Alternatives to Detention, available at https://justiceforimmigrants.org/wp-content/uploads/2017/07/The-Real-Alternatives-to-Detention-FINAL-06.27.17.pdf (last visited on May 28, 2019).