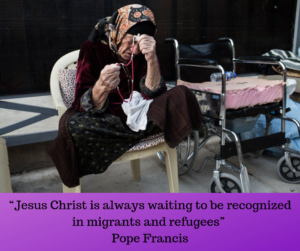 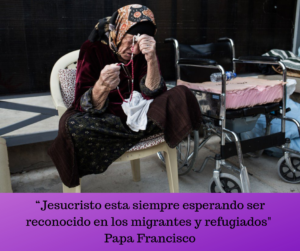 WASHINGTON— Today, Bishop Joe S. Vásquez of Austin, Chairman of the United States Conference of Catholic Bishops’ (USCCB) Committee on Migration, condemned the final rule published by the Department of Homeland Security (DHS) and Department of Health and Human Services (HHS) relating to the care and custody of immigrant children under the Flores Settlement Agreement. The agreement sets forth foundational principles and critical protections regarding the care, custody, and release of immigrant children who are in federal custody, including the general requirements that they be housed in the least restrictive setting and in licensed facilities for childcare.

“This rule will have heartbreaking consequences for immigrant children – those whom Pope Francis has deemed ‘the most vulnerable group’ among migrants,” said Vásquez. “It is an attempt by the Administration to circumvent existing obligations and undermine critical protections for these children. This rule will jeopardize the well-being and humane treatment of immigrant children in federal custody and will result in children suffering long-lasting consequences of being held for prolonged periods in family detention. We oppose this rule that we believe is unlawful and inhumane.  Countless children will be harmed by this new rule and this is simply not acceptable.”

USCCB also opposed this rule when it was initially proposed by DHS and HHS by submitting comments detailing concerns with the rule and urging it be rescinded. 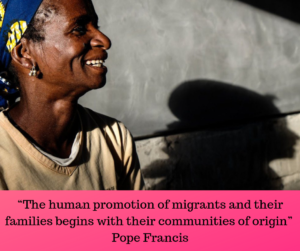 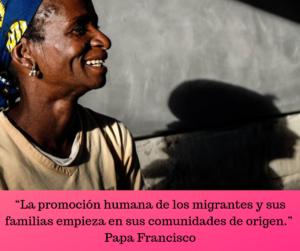 On Wednesday, August 14th, we held a webinar with Father Robert Stark about the upcoming World Day for Migrants and Refugees (September 29th).  Below is the recording and the slides from the webinar.

WASHINGTON— Today, bishops from two committees at the United States Conference of Catholic Bishops (USCCB) expressed their strong opposition to a final rule on public charge put forth by the Department of Homeland Security. The rule, which is expected to be officially published on August 14th and will take effect sixty days after publication, will undoubtedly have a negative consequence for families accessing critical public benefits for which they otherwise qualify. Bishop Joe S. Vásquez of Austin, Chairman of the USCCB Committee on Migration, and Bishop Frank J. Dewane, Bishop of Venice, FL, Chairman of the USCCB Committee on Domestic Justice and Human Development, offered the following statement.

“This rule will undermine family unity and lead many lawful immigrants to forgo vital assistance, including enrollment in nutrition, housing, and medical programs.  Families already in the U.S. will be faced with deciding whether to access critical  assistance programs for which they qualify, knowing that in doing so they could jeopardize their ability to stay here with their loved ones. And, it will reduce the ability of many to reunify with family in the U.S. We have already seen the culture of fear that the anticipation of this rule has created in our communities. Ultimately, we believe that this rule is in tension with the dignity of the person and the common good that all of us are called to support.”

The USCCB also opposed this rule when it was initially proposed by DHS and submitted joint comments with Catholic Charities USA detailing concerns with the rule and urging it be rescinded.

WASHINGTON— Recently, the Trump Administration issued an “interim final rule” that would nearly eviscerate our current asylum system. A 30-day period was given to submit comments to the government about the rule. The move would allow the Administration to block most individuals arriving at our southern border from gaining access to asylum in the U.S. The United States Conference of Catholic Bishops submitted comments on August 9th and called the rule “unlawful, unjust, and unwise.”

Most Reverend Joe S. Vásquez, Bishop of Austin, Texas, Chair of the of the U.S. Conference of Catholic Bishops’ Committee on Migration, issued the following statement:

“We have grave concerns about the Administration’s interim final rule, issued on July 16, 2019, that greatly limits U.S. asylum eligibility at the southern border,” said Bishop Vásquez. “The rule would turn our back on the vast majority of asylum seekers, requiring them to apply for protection in almost any other country through which they transit, leaving access to U.S. asylum exceptionally rare. Not only do we believe that this rule is unlawful, but it also jeopardizes the safety of vulnerable individuals and families fleeing persecution and threatens family unity. Further, the rule undermines our nation’s tradition of being a global leader providing and being a catalyst for others to provide humanitarian protection to those in need. We remind the Department of Justice and the Department of Homeland Security that how we respond to asylum seekers arriving at our border is a test of our moral character and strongly urge the Administration to rescind this rule.”

Please find a copy of the comments here. 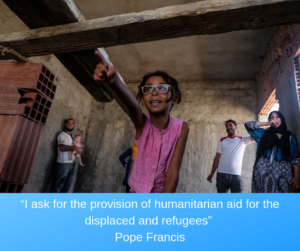 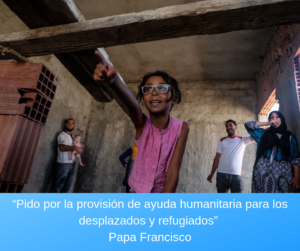 In Wake of Horrific, Hate Filled Violence in El Paso, USCCB Migration Chairman, Domestic Social Development Chairman, and Chairman of the Ad Hoc Committee on Racism Call for Change in Language and Rhetoric of All Americans

WASHINGTON— Today, Bishops from three committees at the United States Conference of Catholic Bishops (USCCB) expressed their deep concern about racism and xenophobia that apparently motivated this weekend’s massacre in El Paso and that have motivated numerous other recent mass shootings in the United States. The Chairmen called on our elected officials to exert leadership in seeking to heal the wounds that these shootings have caused and to deal with the scourges of racism, xenophobia, and religious bigotry, including refraining from expressing hurtful, painful, and divisive rhetoric that dehumanizes and polarizes people on the basis of their race, religion, ethnicity, or national origin.

“The tragic loss of life of 22 people this weekend in El Paso demonstrates that hate-filled rhetoric and ideas can become the motivation for some to commit acts of violence. The anti-immigrant, anti-refugee, anti-Muslim, and anti-Semitic sentiments that have been publicly proclaimed in our society in recent years have incited hatred in our communities. Hatred and harsh rhetoric were echoed in the El Paso shooter’s explanation about why he committed this weekend’s shooting, as well as being evident in the motivation of the shooters who attacked the Tree of Life Synagogue in Pittsburgh last year and the Mother Emanuel AME Church in Charleston in 2015. We, therefore, renew our call to all to act swiftly to stop using hate-filled language that demeans and divides us and motivates some to such horrific violence. Instead, we ask our leaders and all Americans to work to unite us as a great, diverse, and welcoming people.” 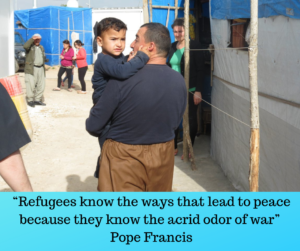 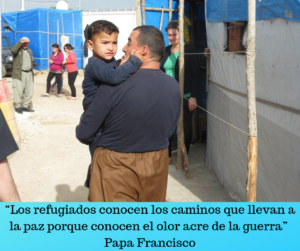 I write on behalf of the U.S. Conference of Catholic Bishops (USCCB) Committee on Migration (COM) to express our opposition to S. 1494, the “Secure and Protect Act of 2019”, as well as to the Amendment in the Nature of a Substitute that we understand Chairman Graham will submit to the bill during this week’s markup by the Senate Committee on the Judiciary.

Our approach to migration is rooted in the Gospel and in the life and teaching of Jesus, who himself was a migrant and refugee, forced to flee for his life with Mary and Joseph. While the Church recognizes the right of sovereign nations to control their borders, nations also have a strong obligation to treat all migrants humanely, to protect children at risk, and to protect those fleeing from persecution. As a nation of immigrants and refugees, we have a long history and commitment to providing welcome and protection for vulnerable immigrants and refugees.

As introduced, and as it would be amended by the Amendment in the Nature of a Substitute, S. 1494 would roll back important protections in current law for vulnerable unaccompanied children in immigration proceedings and create new obstacles for them. It also would make it more difficult for migrant children who are parts of family units and their parents to seek and obtain the immigration relief to which they may be entitled. Additionally, the bill would eviscerate protections in current law for asylum seekers, making it more difficult for bona fide refugees to access the protection of asylum and more likely that they will be thrown back into the hands of their persecutors.

S. 1494 contains many provisions that would be harmful to children.

It would consign vulnerable and traumatized children to prolonged detention and eliminate many standards in existing law and judicial orders that mandate their humane treatment. More specifically, it would overturn important protections contained in the Trafficking Victims Protection Reauthorization Act of 2008 and overturn critical protections for them contained in the Flores Settlement Agreement and its related court orders.

The measure also would unreasonably expedite children’s removal proceedings, thereby limiting their ability to secure legal representation. It could limit children’s release to sponsors pending their immigration court proceedings, leading to prolonged time in federal custody. Also, it would force the repatriation of children who are not found to qualify for asylum without consideration of whether they will be safe when they return. And it would make it more difficult for abused, neglected, or abandoned children to obtain Special Immigrant Juvenile relief in the United States. Further, it contains provisions that would severely limit due process and humanitarian protections for children, subjecting them to new standards that would be more difficult than those that adults face.

With respect to asylum, S. 1494 also would eviscerate protections in current law for asylum seekers, making it more difficult for people fleeing persecution to access the protection of asylum and more likely that they will be thrown back into harm’s way.

Among the asylum-related provisions in the measure we object to are those that would bar persons who enter the United States between ports of entry from obtaining asylum, as well as provisions that would allow the United States to unilaterally deem a country a “safe third country.” We also oppose the bill’s provision requiring the temporary establishment of processing centers in Central America and Mexico and barring migrants from those countries from applying for asylum at the U.S. border. And we also do not support provisions that would subject Central American asylum seekers to the annual refugee ceiling, which has been set at historically low numbers under the current Administration. Finally, we oppose provisions that would limit asylum seekers’ ability to apply for other types of relief beyond asylum.

For these reasons, we urge you to oppose S. 1494 during the Committee’s consideration of this measure and to support amendments to eliminate its onerous provisions.

Thank you for considering our concerns.