On Thursday, February 28th, 2019, we held a webinar titled: “Tackling Root Causes: Addressing Mass Migration at its Source.” Below are the slides and the webinar recording.

My name is Bill Canny. I am the Executive Director of the Department of Migration and Refugee Services (MRS) within the U.S. Conference of Catholic Bishops (USCCB). On behalf of USCCB/MRS, I would like to thank the House Judiciary Committee, as well as the Committee Chair Representative, Jerrold Nadler (D-NJ), and the Ranking Member, Representative Doug Collins (R-GA), for the opportunity to submit this written statement for the record.

The treatment of immigrants and protection of family unity are of profound importance to the Catholic Church. USCCB/MRS has long supported and served unaccompanied children and immigrant families. And, in the wake of the Department of Justice’s (DOJ) April 6, 2018 “Zero Tolerance” memorandum, USCCB/MRS had the opportunity to assist the federal government in its effort to comply to reunify separated families. Through this effort, USCCB/MRS worked on a charitable basis to reunify and serve nearly 900 of the separated and reunified families. With this experience, USCCB/MRS, through the national Catholic Charities network, is the single largest service-provider for this vulnerable population. While USCCB/MRS appreciated the opportunity to assist and reunify these families, the Church has been and continues to be a vocal opponent of forcible family separation. As Cardinal DiNardo, President of the USCCB, and Bishop Vasquez, Chairman of the USCCB Committee on Migration noted: separating babies from their mothers is immoral.

In this statement, I provide a brief overview of USCCB/MRS’ experience serving separated children and reunified families and then share recommendations to promote their humane and just treatment by the U.S. government.

USCCB/MRS has operated programs, working in a public/private partnership with the U.S. government, to help protect unaccompanied children from all over the world for nearly 40 years. Since 1994, USCCB/MRS has operated the “Safe Passages” program. This program serves undocumented immigrant children apprehended by the Department of Homeland Security (DHS) and placed in the custody and care of the Department of Health and Human Services’ Office of Refugee Resettlement (ORR). Through cooperative agreements with ORR, and in collaboration with community-based social service agencies, the Safe Passages program provides community-based residential care (foster care and small-scale shelter placements) to unaccompanied children in ORR custody, as well as family reunification services (pre-release placement screening and post-release social services for families). In fiscal year 2018, the USCCB/MRS Safe Passages program served 1,125 youth who arrived as unaccompanied children—907 through the family reunification program and 218 children through the residential care programs.

Additionally, the Catholic Church in the United States has long worked to support immigrant families, providing them with legal assistance, pastoral accompaniment, and visitation within immigrant detention facilities, as well as social and integration assistance upon release.

As a long-time service provider for unaccompanied children, I note that separation of families at the U.S./Mexico border has been occurring for years in instances in which child protection concerns exist. Beginning in August 2017, however, our program began to receive a notable increase in referrals of separated children. Our staff and partners saw firsthand the terrible trauma that these children suffered after being torn away from their parents. Many of these children suffered terrible anxiety and, in some cases, developmental delays.

The President signed an Executive Order on June 20th, calling for end of family separations. Unfortunately, we are seeing that these unjust separations have not entirely halted. Take for example, the following case that USCCB/MRS learned of through our Safe Passages program:

Gloria was forced to flee Central America with her two sons, Marco, age 14, and Juan, age 9.[1] The family had been the target of extortion in their home country. After Gloria reported the extortion, the police retaliated – not only did they beat her, breaking her arm, but they also claimed she was gang affiliated. After receiving a death threat shortly thereafter, Gloria took her sons and headed to the U.S. in search of protection. She was apprehended by Border Patrol officers on June 20, 2018 and taken into custody, where she and Juan were separated from Marco. Although Juan fell ill and began to vomit, he received no medical attention. After five days in custody, she and Juan were transferred to a family detention center while Marco was deemed unaccompanied and sent into ORR care. After a brief stint in family detention, she was told that she would be separated from Juan due to her “criminal history” (the false gang affiliation claimed by the police in her home country). Despite Gloria’s attempts to explain her asylum claim and lack of criminal history, including sharing the police report she filed against the corrupt police officers, she and Juan were separated. She was given five minutes to say goodbye to her son on July 1, 2018 before he was dragged away screaming to be deemed by the U.S. government an unaccompanied child. The trauma Juan faced was compounded by the fact that he has autism, ADHD, disruptive behavior disorder, and language delays. And while the family eventually was able to reunite, it was nearly three months before they were all together again.

While the magnitude of the family separation crisis significantly lessened after the June 20th Executive Order and June 26th preliminary injunction in Ms. L., et al. v. U.S. Immigration and Customs Enforcement, et al., the problem has not been solved – families like Gloria’s continue to be ripped apart unnecessarily.

In addition to serving unaccompanied and separated children through the Safe Passages program, from July 2nd through July 30th, USCCB/MRS worked in partnership with Lutheran Immigration and Refugee Service (LIRS) to assist both DHS and the Department of Health and Human Services (HHS) in their work reunifying separated families. Besides providing initial humanitarian and reunification assistance, USCCB/MRS provided access to social and legal service and case management. USCCB/MRS provided these charitable services because of our belief that such services would help support the separated families, reduce their ongoing trauma, and help ensure positive compliance outcomes.

As detailed in our joint report, “Serving Separated and Reunited Families: Lessons Learned and the Way Forward to Promote Family Unity,”[2] HHS had initially contacted USCCB/MRS on July 2nd about possible engagement with the soon to be reunited families. HHS expressed concern about the well-being of the families upon release and noted a desire to ensure that the families would have access to social services. Subsequently, on July 5th, DHS contacted both USCCB/MRS and LIRS to similarly discuss reunification operations. While neither DHS nor HHS had a clearly developed plan for reunification at the time, both departments wanted to ensure that families had support upon release.

During the reunifications, USCCB/MRS partners provided released families with immediate shelter, a hot meal, change of clothes, shower, and assistance with making travel arrangements to the reunified family’s intended destination in the United States. The two agencies served a combined 1,112 families, with USCCB/MRS and its on-the-ground partners serving 897 of these families. While serving these families was an incredibly rewarding experience, the process was not without its challenges. As an initial matter, many families were dropped off at reception sites well into the night – placing a strain not only on the staff at the sites but also adding to the families’ confusion and stress.

Coordination, both intra- and inter-agency, also appeared tenuous or lacking in many instances. For example, USCCB/MRS documented instances in which DHS’s Transportation Security Administration officers at certain airports refused to accept the families’ identification documents provided by DHS’s Immigration and Customs Enforcement (ICE) officials. This lack of coordination resulted in newly reunited families experiencing long delays, missed flights, and additional hurdles as they sought to reach their final destinations.

Another major challenge faced by all of the USCCB/MRS reception sites was that many of the newly reunified and released families arrived at the reception centers with their immigration paperwork, such as the Notice to Appear (NTA) and the ICE check-in information, completed with the wrong address. Rather than listing their final destination, the documents would list the address of the particular reception site or the immigrant detention facility itself. Upon elevating this issue, ICE attempted to change the addresses of those families who were to be reunified and released prospectively. Some of the reception centers, however, continued to receive NTAs for families that had already moved on to their final destinations in other cities. Further, USCCB/MRS partners reported that many families faced challenges with timely filing their change of address forms and change of venue requests with the Executive Office for Immigration Review (EOIR).

The biggest challenge, however, has been addressing the families ongoing needs. USCCB/MRS and LIRS made the commitment to provide to each of the reunified families they served with up to three months of post-release services in their final destination cities. These services included social services, a legal orientation, and a referral to a qualified and trustworthy low or pro bono legal services provider. While not all families desired post-release services, USCCB/MRS was able to provide further assistance to nearly 700 families. Through this process, USCCB/MRS found that many of the reunited families are experiencing symptoms of trauma, including separation anxiety. Further, longer-term post-release services are clearly needed. The three months of services provided by the agencies could typically only address the families’ immediate needs in their new communities. Often, it is only at the point in which these immediate needs are addressed that families are ready to start tackling the trauma and stress from which they suffer.

In light of our experience serving separated children and families, and in recognition of their ongoing trauma and vulnerabilities, we would like to share the following recommendations for the Administration and Congress.[3]

Immigration policies implemented by our government must be humane and uphold human dignity. While our nation will never be able to rectify the life-long trauma it has inflicted upon separated families, we can and must ensure that no child or parent ever has to face unjustifiable separation again. As always, USCCB/MRS stands ready to work with the Administration and Congress to help develop policies that uphold family unity and the best interest of the child. 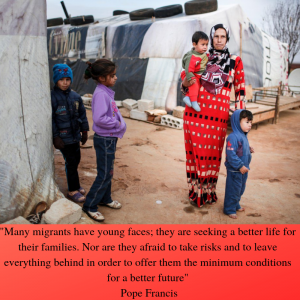 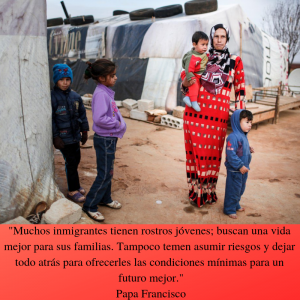 President of U.S. Bishops’ and Chairman of Bishop’s Committee on Migration Respond to President’s Order to Build Border Wall

WASHINGTON—Today President Trump announced that he will issue an order stating his intention to make use of funds previously appropriated for other purposes to fund the construction of a border wall at the U.S./Mexico border that Congress has refused to fund.  Cardinal Daniel DiNardo of Galveston-Houston and President of the United States Conference of Catholic Bishops (USCCB), and Bishop Joe S. Vásquez of Austin, Chairman of the USCCB Committee on Migration, issued the following joint statement:

“We are deeply concerned about the President’s action to fund the construction of a wall along the U.S./Mexico border, which circumvents the clear intent of Congress to limit funding of a wall.  We oppose the use of these funds to further the construction of the wall. The wall first and foremost is a symbol of division and animosity between two friendly countries. We remain steadfast and resolute in the vision articulated by Pope Francis that at this time we need to be building bridges and not walls.” 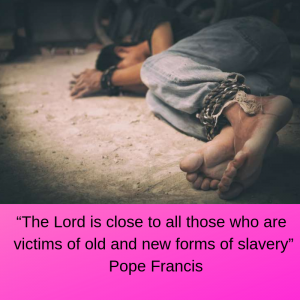 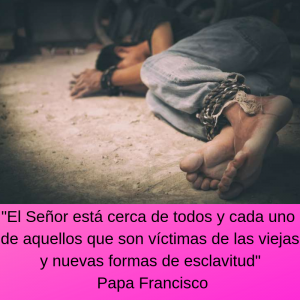 Webinar: Humanitarian Crisis at the Southern Border and the Catholic Response

On Thursday, February 7th, we held a webinar about the Humanitarian Crisis at the US/Mexico border and the Catholic Response. Joining us in presenting were Casa Cornelia, The Hope Border Institute and the Columban Center for Advocacy and Outreach. 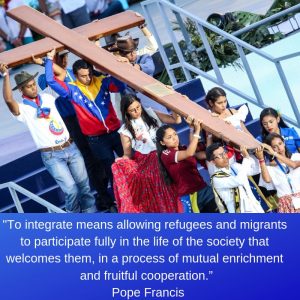 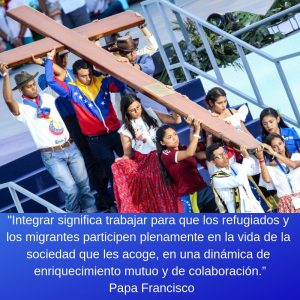