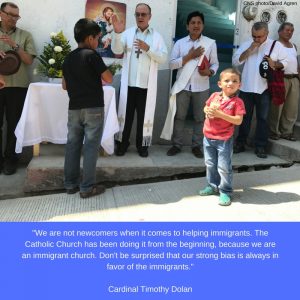 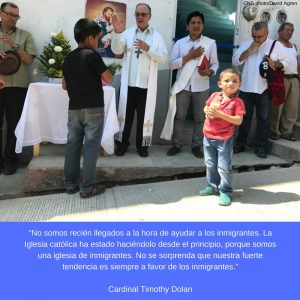 RCUSA Statement on the Decision of the 4th Circuit Court

Below is the statement on the decision by the 4th Circuit Court, put out by Refugee Council USA (RCUSA), of which USCCB/MRS is a member organization:

RCUSA is heartened that the 4th U.S. Circuit Court of Appeals issued a ruling against the Executive Order that was issued on March 6th. In doing so,  it found that the President’s travel ban is likely to be ruled unconstitutional. This win means that, as the world faces an historic displacement crisis, America’s doors will remain open, as a symbol of U.S. global leadership at a time when it is sorely needed.

Hans Van de Weerd, Chair of RCUSA, states; “Our hope is that -if this case makes its way to the US Supreme Court-  it too will  uphold the 4th Circuit decision to preserve the proud American traditions of welcome and non-discrimination. As always, RCUSA stands at the ready and welcomes the opportunity to work with the Administration and Congress to ensure that the U.S. refugee resettlement program is successful and secure.”

WASHINGTON—The chairman of the U.S. Conference of Catholic Bishops’ (USCCB) Committee on Migration, Bishop Joe S. Vásquez of Austin, Texas, offered his appreciation to Secretary John Kelly of the Department of Homeland Security for his decision to extend Temporary Protective Status for Haitians in the United States for six months but urged continued engagement and humanitarian assistance to improve conditions in Haiti.

“On behalf of the USCCB Committee on Migration, I express gratitude to Secretary Kelly of the Department of Homeland Security (DHS) and the Trump Administration for extending another six months of Temporary Protective Status (TPS) to over 58,000 Haitians living and working in the United States legally.  While this extension is helpful, it still leaves many Haitian families in the United States in an insecure and vulnerable position, particularly with respect to ensuring legal work authorization. Extending TPS serves an important humanitarian role by providing for the safety, well-being, and stability of Haitians living in the United States. We encourage our government to work proactively with the Haitian government to provide life-saving aid and recovery assistance. Haiti will continue to struggle to receive back those who are temporarily protected, even those who may be returned in the near future. Through the Church’s service networks, we will continue to assist Haitian families in the U.S., aid the rebuilding process in Haiti and look for opportunities to collaborate with the Church in Haiti and the Haitian and U.S. governments.” 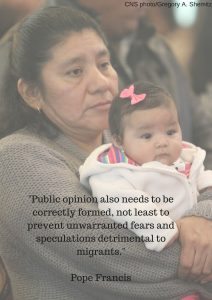 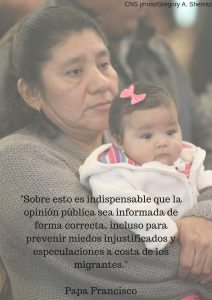 Click below to read the letter from Committee on Migration Chair, Bishop Joe S. Vásquez, on three bills that were before the House Judiciary Committee, involving immigration and law enforcement.

Full text of the letter below:

House Committee on the Judiciary

I  write  on  behalf  of  the  U.S.  Conference  of  Catholic  Bishops’  Committee  on  Migration (USCCB/COM) to express our opposition to three bills that are scheduled for mark up in your committee this Thursday, May 18, 2017: (1) H.R. 2431, the “Michael Davis, Jr. and Danny Oliver in Honor of State and Local Law Enforcement Act” ; (2) H.R. 2406, the “Immigration and Customs Enforcement Authorization Act of 2017;” and (3) H.R. 2407, the “United States Citizenship and Immigration Services Authorization Act.”

The USCCB/COM acknowledges and accepts the role of the government in ensuring the integrity of our border and enforcement of our laws. We appreciate the government’s commitment to public safety and recognize the contributions of law enforcement. However, we believe that, together, these three bills would constitute an unacceptable expansion in immigration enforcement that would contravene the principle of treating all individuals with human dignity, regardless of their immigration status.

H.R. 2431 proposes massive increases to immigrant detention. Further, we believe it would undermine community trust of local law enforcement, rollback existing protections for accompanied children in the context of family detention, and erode the existing framework for extension of Temporary Protected Status (TPS).

USCCB/COM is troubled by many of the provisions in this measure, including those that would:

Expand Detention: H.R. 2431 calls for further increases in our already expansive immigration detention network and for detention of not only those pending removal but those awaiting a decision. Broadening detention to this population would result in the mass detention of asylum seekers, many fleeing persecution and torture, while they are working to comply with their immigration proceedings. We fear it would result in increased retraumatization and is not necessary in this time of fiscal austerity when other, more effective mechanisms like community-sponsored case management based alternatives to detention are available.

Expand State and Local Immigration Enforcement: As written, H.R. 2431 would create a disjointed national immigration policy that could lead to 50 different state immigration policies. It would allow states or political subdivisions of states to create their own criminal and civil penalties for federal immigration violations so long as the penalties applied do not exceed those of federal law.

Limit Protections for Accompanied Children: H.R. 2431 would strip existing protections from accompanied children, including the right to be detained in the least restrictive setting. This could lead to increased family detention, which we have long opposed as an inhumane practice. Detaining children is psychologically and physically damaging; it also is contrary to international human rights law and generally accepted child welfare principles.

Erode the TPS Framework: H.R. 2431 would further undermine the existing TPS framework. Congress created TPS in 1990 as a uniform procedure to provide temporary protection to individuals who cannot safely return to their countries of origin. It was a bipartisan effort signed into law as part of the Immigration Act of 1990 by President George H. W. Bush. H.R. 2431 would establish a new extreme threshold that would require Congress to pass legislation, within 90 days of a request by the Department of Homeland Security (DHS), to extend TPS designations. We fear that this would, effectively, result in the end of the use of this vital humanitarian program, which has helped protect many families whose lives and homes have been upended by natural and man-made disasters. We believe that it would be unjust to prevent those suffering from such disasters from seeking temporary refuge in our country.

In addition, USCCB/COM also opposes H.R. 2406 and H.R. 2407. H.R. 2406 would expand the ability of Immigration and Customs Enforcement (ICE) officers to carry out warrantless arrests of individuals. Many in our communities and parishes are already living in fear of deportation and family separation, and this bill will further fuel these concerns. H.R. 2406, further, would legislatively mandate the establishment of a Victims of Immigration Crime Engagement (VOICE)

Office to serve families of victims of “criminal aliens.” While we recognize the tragedy that all crime victims and their families endure and seek to offer our solace for their losses, we are concerned that H.R. 2406 does not contain any provisions to assist immigrant victims who have been targeted as a result of a hate crime. Furthermore, we fear that codification of the VOICE office by Congress will feed into rhetoric that seeks to portray all immigrants as criminals. We also are very concerned that the bill would prohibit the operation of the Office of Public Advocate within ICE. We note with appreciation our engagement with ICE at the national and the field office level and believe that such engagement with civil society is essential to ensuring that DHS policies are just and humane.

Finally, H.R. 2407 would make the E-verify system permanent. USCCB/COM believes that the overarching goals of E-Verify are meritorious but that improvements to the program are needed. Such improvements include complimentary labor and employment protections to ensure that E-Verify does not become a tool to undermine workplace rights or take advantage of workers’ vulnerabilities.

For the reasons stated above, the USCCB/COM believes that H.R. 2431, H.R. 2406, and H.R. 2407 are not viable ways to progress border security and internal immigration enforcement. We ask that you not support these bills and instead work to create a comprehensive immigration bill that reforms all aspects of our immigration system in a common-sense and humane manner and which promotes the common good.

Know Your Rights for Refugees and Advocates Webinar

On Wednesday, May 17th, we held a webinar for refugees and advocates on their rights for encounters with Immigration Enforcement officials. We also talked about how recent executive orders have impacted their rights. Slides and webinar are below. 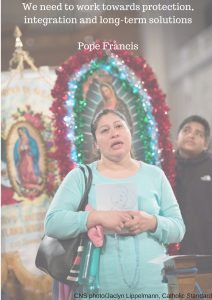 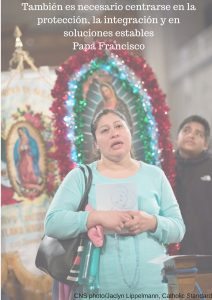 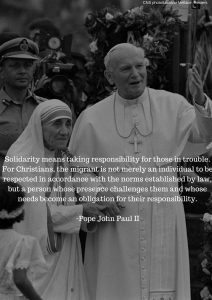 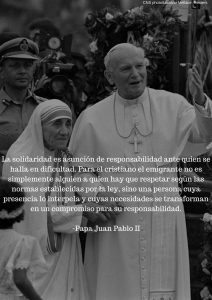 On April 24, the USCCB Committee on Migration Chair, Rev. Joe S. Vásquez, sent letters to both the United States House of Representatives and to the United States Senate asking for both chambers of Congress to look at the way that Enforcement Actions occur at Sensitive Locations. Read the letters below. 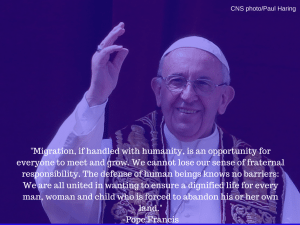 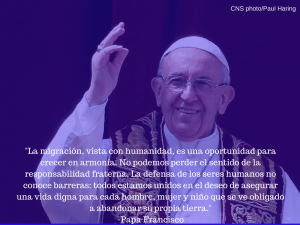